#WeirdWednesday: The Brown Mountain Lights -Not the sighting we expected 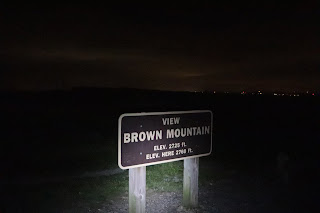 Can the Paranormal and High Strangeness occur in the same location?

It's a theory our friends over at Liminal.Earth are exploring through their crowd-sourced geolocation project! Be sure to give them a visit and submit your inexplicable experiences and encounters!

(Portions of this post originally appeared on Liminal.Earth and can be found HERE)

On a trip up here to see the fabled Brown Mountain Lights. Got a tip from some locals on the best time to witness the lights, so I headed out late in the afternoon to go to the Brown Mountain Overlook and see if I could get them on camera.

Drove up to the location and pulled up, there were 4 other cars in the parking lot. With my lights still on, I noticed that EVERYONE was crowded just a little past the sign for the Brown Mountain Lights. It looks like everyone sits next to the stones on the overlook edge next to a USGS benchmark. 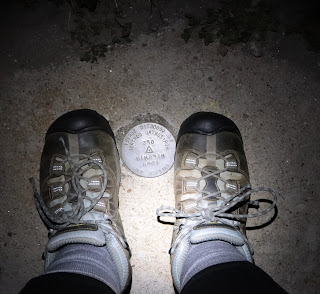 The crowd of about 8 people didn’t take kindly to me or my little dog stumbling around in the dark near them trying to take photos of the night sky and observe “possible” Brown Mountain Lights so I walked a few feet down from them and tried to setup my tripod and camera.

After about 15 minutes of NOTHING, not a single light, I decided I should head back to the van for a snack. I passed the people, two cars driving away, and towards my van. As I was getting closer to my van, I noticed picnic tables to the north. Since there’s no light out there, you have to rely on the dim light of your smartphone or the lights of any passing vehicles.

Sitting at the picnic tables was a figure. It wasn’t sitting at a table, but on top of a picnic table. I could just barely see the outline of the figure, it was wearing a brown-ish grey hoodie, the hoodie over their head. They were curled up, knees tucked with arms wrapped around them. The figures head was down and it was almost like they were crying. I started to say “Hey, you okay?” and walked towards the figure. A passing car with it’s brights on blinded me, and as my eyes refocused, the figure was gone. I looked around, nothing. Nobody was at the picnic table area. I looked back behind me to see if maybe the person walked back over to the crowd of other people, only to see there were only about 4 people over there. There was nobody else around, and unless that figure jumped off the overlook without a sound or silently ran into the steep brush at the side of the overlook cliff, that figure vanished. 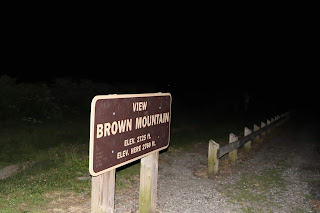 While at the van, Greg and I were called out to by two people leaning against their car. They asked us if we were there for the lights and then said "Well, you were looking in the wrong direction!"  -They pointed in front of them, opposite of where other folks were looking.  And with that, Greg finally saw the lights!  I saw....something. I'm not quite sure of what I saw, and I'm holding back a lot of skeptical theories here, but I want to see them again before I make any assumptions or descriptions of what I saw that night. Especially if my sightings included....well, a ghost.

Later, Greg asked me if I saw “the kid in the hoodie” and I told him about what I saw. He saw something different. He said every time he was near that spot, in his peripheral vision he kept seeing a kid in a hoodie on the picnic table, but every time he looked over there it was either too dark to see clearly, or there was nothing there.

I am sooo evidence-reliant, and that's why I struggle with this experience. I don’t have any evidence of what I saw. I took a picture of the picnic tables, and even at 10:30pm, all I had were distinct  photos of picnic tables in the dark, with obvious flash, a little blurry but no haze or fog distortion. It's not like you would normally take a photo of someone sitting on top of a table in the dark. I mean, obviously if it was a person, we were both out there doing something weird, so it wouldn't make sense to take a photo of a stranger in the dark.  I can’t explain or substantiate what I saw.

So, how likely is it to have both a Para-Natural phenomena and a Paranormal experience in the same location?  In the past, when I've heard tales of too much "weird" happening in one location, I've been dismissive, and very critical of the experiences or evidence presented.  While it takes a couple of giant leaps down the rabbit hole to say it all ties together, I'm wondering if the possibility is there.

But my experience has nothing to do with the lore of the Brown Mountain Lights. It was just a ghostly spectral figure, that may or may not have been there. I've been unable to find any accounts of modern hauntings or ghosts in that spot (If you know of any, be sure to EMAIL US).

We're going back to the Brown Mountain Lights. It's a slow process, but we're planning an approach that isn't like those previously attempted. While I don't discount legends or folklore, I think there's a few aspects of the phenomena that aren't commonly known.

Want to know more about the #BrownMountainLights? Here's a great book I recommend that lends more to scientific theories and para-natural occurrences rather than the supernatural: 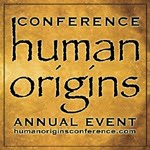 LISTEN TO THE CREEPGEEKS PODCAST HERE