Series Review: On the Trail of UFO's by Small Town Monsters

A few weeks ago (about the same time Greg decided to become a UFO off a ladder), we were honored to get a hold of a few screeners from Small Town Monster's latest endeavor: "On The Trail Of UFOs"...Our "homework" and reward during the healing process has been to watch the series, and so far we're glad we've got something to stimulate the curiosity and reinvigorate our desire to explore the unexplained, the weird, and the unknown.

To say we're fans of Small Town Monsters would be an understatement, I mean, just look at that smiling fuzzy face (not the one with the beanie on). 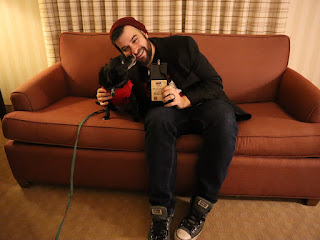 We've had most of their movies and series on our radar since our evolution into a Paranormal Podcast. The genuine desire to portray monsters and legends in our world from the original experiences/encounters, while respectfully documenting the evolution of folklore surrounding aforementioned monsters is something greatly respect. Seizing the opportunity to go on-scene with the original witnesses and researchers instead of "taking to the web" or spinning a story to be more than itself is something we need in the Paranormal/Cryptozoology community.

We've watched the series from multiple perspectives; from the novice UFO researcher, the aspiring Cine-nerd, and the "Experiencer"/Believer.

The series holds up as well-rounded, managing to appeal to multiple communities whilst encouraging the "newbie" to the UFO phenomena to explore for themselves (as opposed to the toxic environment created on Social Media that turns away many new or aspiring enthusiasts).

Speaking of which: Thank YOU Small Town Monsters for addressing the current "climate" in the Social Media world regarding UFO phenomena. While my only bit of feedback would have been to explore the lasting effects of  #StormArea51 on the general public, I can understand the greater consequences of providing a full break down on the ridiculous viral nature that swept the nation vs. the traditional UFO researchers and Paranormal Researchers out there battling for their voices to be heard over the groundswell of memes, live-streams, and "Fyre-Fest" madness. While we certainly need someone other than mainstream media to bring the UFO phenomena into the wide open (whether it's to the "great unwashed" of Meme Culture or the After-School Soccer Karens), earning the ire of the "Experts" and talking heads of the UFO community is not something we'd wish on our worst enemy or even someone with four last names and a huge media budget.

The series isn't out to set the UFO community on fire, but rather, to hold a mirror to those that label themselves researchers, believers, and...."experts".

Providing a reflection of ourselves as believers and researchers; where are we as a community "failing" to keep the phenomena alive?

What are we bringing to the table as new researchers come into their own?

Are we so focused on the general public's reaction and reception of the Phoenix Lights, Tic-Tacs, and UAP videos clips that we fail to dig deeper?

STM highlights a few overlooked or not commonly known individuals with their own insight into the UFO phenomena that don't make the Twitter #Trending list or a casual Google Search.

Acknowledging the early days of the UFO phenomena, with dirigibles, cigar-shaped ships, and encounters from the northeastern region of the US aren't something most younger researchers are aware of. The selection of researchers was fantastic, I appreciate hearing from Sprague, Dr. Kitei, Mr. Gordon, Weatherly, and a few not as well-recognized individuals I follow on Social. This series is meant to help explore the phenomena, not put another celebrity on a pedestal to appease the masses.

As aspiring film nerds/frugal filmmakers, take note. We think it's awesome to see STM evolve through their documentaries and mini-series. Breedlove is the Ryan Connelly/Film Riot of the Paranormal Community, and his growth as a film maker/producer is evident in his past two works (Momo: The Missouri Monster, and now On The Trail of UFOs). While holding fast to retaining the indie edge, O.T.T.U. includes clean graphics, transitions, and cohesive interviews/story building that are easy to follow.  While I'm sure the cutting room floor is full of entertaining bits (and maybe a few obnoxious Pepper sound bloopers), I appreciate how the series retains a sense of genuine, unscripted interactions with coherent storytelling.

With regards to building a storyline, I appreciate the story of Legro's journey throughout the series. I think we can all relate to the desire to see and experience the UFO phenomena. And while a million different pieces fell into place during the creation of this body of work, you can't "control" a phenomena. I think it's wonderful to show the "reality" of the phenomena; from Legro's own experiences during the series to the preparedness of Ron Regehr, and how rare it is to experience what we now know as some of the most amazing UFO/UAP events of our time.  I really hope the entire team gets the opportunity to come back out to the Western NC region, and maybe we can all search out the Brown Mountain Lights. The invitation is open, plus maybe we can explore some of the "Gorge Lights" too!

On the Trail of UFOs lands on streaming platforms SOON. But we encourage you to support Small Town Monsters via Kickstarter to fuel all their endeavors for 2020. Check out the link below: 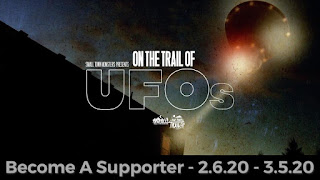